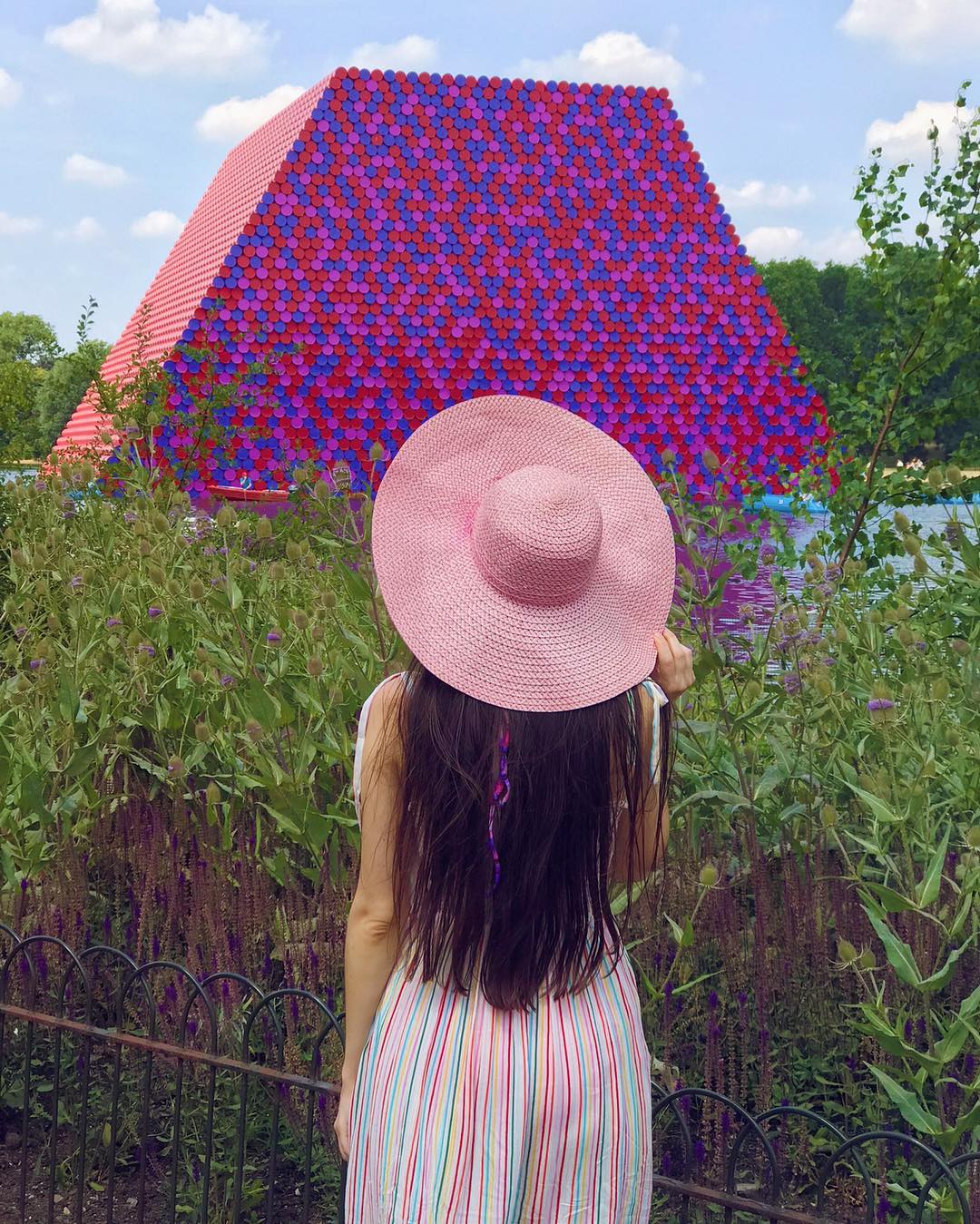 I’ve been bad with monthly updates recently – in fact, I haven’t published one since February.  Autumn is the time to get back on course, so that’s what I’m going to do. To start off, here’s three months of summer in one mammoth of a post – you might want to get yourself a cup of tea before we get started!

Travel: Where I went this summer

My summer travels started in early June with a trip to Cheltenham for the town’s famous Science Festival. The days were so packed I had little time to explore the city, but I didn’t mind: the festival programme, full of amazing, inspiring and interesting presentations, kept me well occupied. I wish I could have fit in more talks!

On my way back home from the festival, I scheduled in a short stop in Birmingham. This must have been my quickest city break ever: I only had 20 minutes to explore the town. It was enough to squeeze in some of its main sights, such as Britain’s oldest cinema The Electric and the futuristic Selfridge’s Building that my fellow #archilovers will probably be familiar with. Read more about this mini-minibreak here.

Speaking of minibreaks, we had another one in July at the gorgeous Grand Hotel Eastbourne. One of the most famous and luxurious hotels on the English coast, the Grand Eastbourne didn’t disappoint. My weekend activities included lounging by the hotel’s outdoor pool reading Agatha Christie, splashing around in its indoor spa, a couple of dips in the pool, a walk on the beach and an evening spent gazing at the starry sky – it’s considerably brighter here than it is in London!

Moving from local to long-haul, in July we also spent time in San Francisco, a city we’ve become increasingly familiar with in recent years. In fact, this was my fourth time visiting it in less than 20 months! Sadly, the trip didn’t get off to a good start: the Airbnb flat we had booked turned out to be a total scam. It continued in an even less pleasant way when my boyfriend fell ill with pneumonia. Flying back in that condition was super difficult for him, but we were both so glad to get back to Europe! Despite the circumstances, we did manage to make some nice memories, too, such as climbing the famous Twin Peaks (click here for the post). I also finally got to ride the famous cable cars, which was just as much fun as it looks like.

On a more positive note, my favourite trip this summer has to be taking my boyfriend to visit Southern Russia for the first time. As there are no direct flights to Rostov from any airport near us, we had to change planes in Istanbul. This was a chance for me to finally visit a city that, as a Christian and a person of Greek heritage, I have always found fascinating. Read more about our adventures in Istanbul here.

After a long journey and a day spent in Istanbul, we finally arrived in Rostov in the middle of the night, tired but very excited. My grandmother was waiting for us at home, with lots of food prepared (if you know Russian grandmothers, you know they always feed you well. Or maybe that’s grandmothers in general?). From that moment onwards, our days in Russia were filled with love, laughter, friends, great food, amazing sights and hot weather. Oh, and football – after all, we were in town for the FIFA 2018 World Cup.

Also on the list of my favourite summer travels is the combined work/fun trip to Finland. Northern Europe enjoyed an unprecedented heatwave this summer, which meant that I actually got to swim in Helsinki for the first time in… I don’t know how many years. The heat suited Finland well: everyone seemed kinder and happier, and we spent all our time outside and stayed out until the early hours. If only Helsinki was always this much fun!

During the trip to Finland, we also visited Estonia for our friends’ wedding, another highlight of this summer. The wedding started with a beautiful ceremony in an Orthodox church in the heart of Tallinn and continued with a party in a charming villa tucked away in Estonian countryside. We danced until the early hours and barely got any sleep in, so I was glad I’d booked us a room at the Hilton Tallinn for the following day. With its comfy beds and a relaxing spa, it was just what we needed after a weekend of partying!

Back home in London, I spent a lovely week in Windsor, at a conference on Life Beyond the PhD. I still have at least a year to go before submitting my thesis, but it’s good to be prepared.

Last but not least, at the very end of August, I jumped on a train to Brussels. My destination? A summer camp for young feminists, organised by the European Women’s Lobby. As the camp continued into September, I’ll tell you more about it in the next roundup… I’d say we have enough travel for one post as is, don’t you think? 🙂

Books I read this summer

I spent quite a lot of time this summer working on my thesis and reading academic literature, so I had less time to focus on non-academic reading. Perhaps reflecting this, I started but didn’t quite finish several books, including The Better Angels of Our Nature by Steven Pinker, Homo Deus by Yuval Noah Harari and I Love Dick by Chris Kraus.

The books I did finish tended to fall into the category of light reading. Prime examples? The Swimming Pool and The Last Mrs. Parrish, two very similar novels that made for surprisingly good entertainment.

I also read a Russian book on the Dyatlov pass incident and a Finnish novel Sivuhenkilö. And, of course, no holiday season is complete without some Agatha Christie. This summer, I re-read Sad Cypress and Evil Under the Sun.

I am a bit embarrassed to admit this, but it seems like I only visited one museum this summer: the San Francisco Museum of Modern Art. It was the second time at SFMOMA for me, but the first for my boyfriend, and we had a lot of fun. It’s pretty expensive (50 dollars for two people!) but definitely worth a visit if you can afford it.

YES! One of the highlights of the summer was travelling to Russia for one of the greatest shows on our planet – World Cup football. I am so glad that we made it happen, particularly as it seemed quite unlikely at the beginning of the summer: I had missed out on the first ticket-selling stages, and there were no seats left for games that worked for us. I literally spent hours in June refreshing the FIFA website, but it was all worth it in the end as we managed to grab two seats to see Iceland and Croatia play in my beautiful city of birth, Rostov. Such an incredible experience. 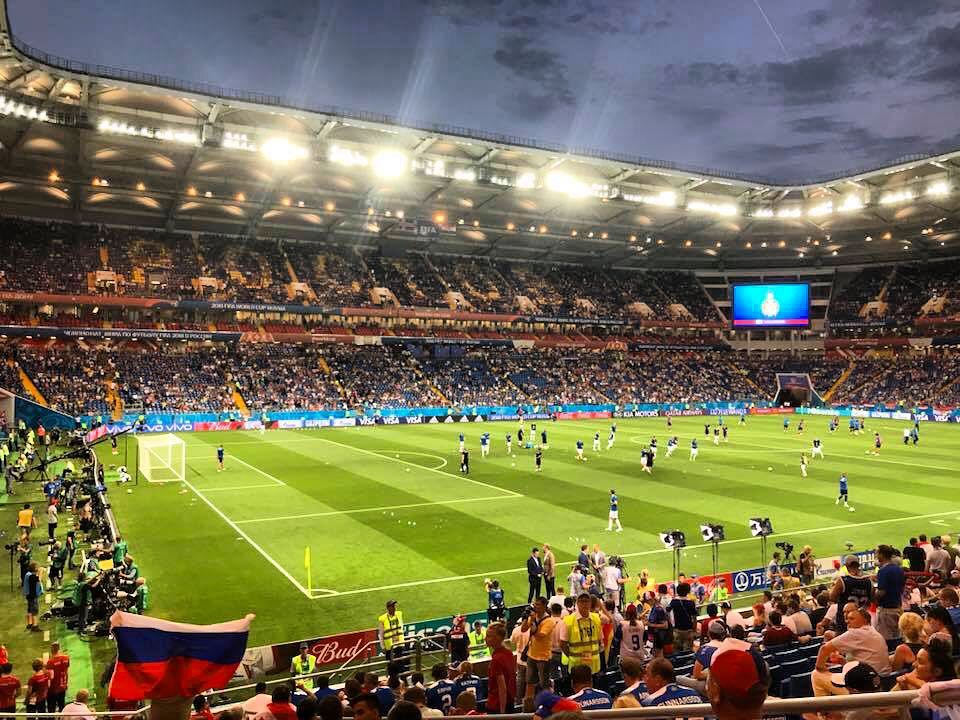 Speaking of more traditional shows, we saw Consent at the Harold Pinter Theatre in London’s West End. As the name suggests, the play touches upon the topical themes of violence and (lack of) justice. It also explored romantic relationships, friendships and trust. Despite the difficult topic and storyline, Consent even managed to be funny at times. All in all, a great play.

The count for movies still remains zero. I just told my boyfriend I haven’t been to the cinema once this year, and he couldn’t believe it. I can’t quite understand it myself. You see, I absolutely love going to the movies, to the point where I would often do it twice or even three times a week. I still love it, so I’m not sure what’s happened…I guess travelling so much means you don’t necessarily have the energy to do everything you’d like to do (though I’m not complaining!). Or maybe it’s down to the fact that our new flat in London has a big TV screen and a very comfortable sofa. 😉

I know it’s cheating a bit since this was actually in late May, but I also have to mention that we saw Chromeo at Melkweg Amsterdam. We’ve listened to Chromeo ever since we got together 10 years ago, so it brings up lots of great memories for us, and the night was pretty magical. I’m so glad they’re coming back to Europe later this autumn!

This makes me really proud, but it’s true: I think the best restaurant food I tasted this summer was in Russia. In particular, I’d like to mention Onegin Dacha, a charming restaurant in the centre of Rostov. The food is very good, and the decor is breathtakingly beautiful. 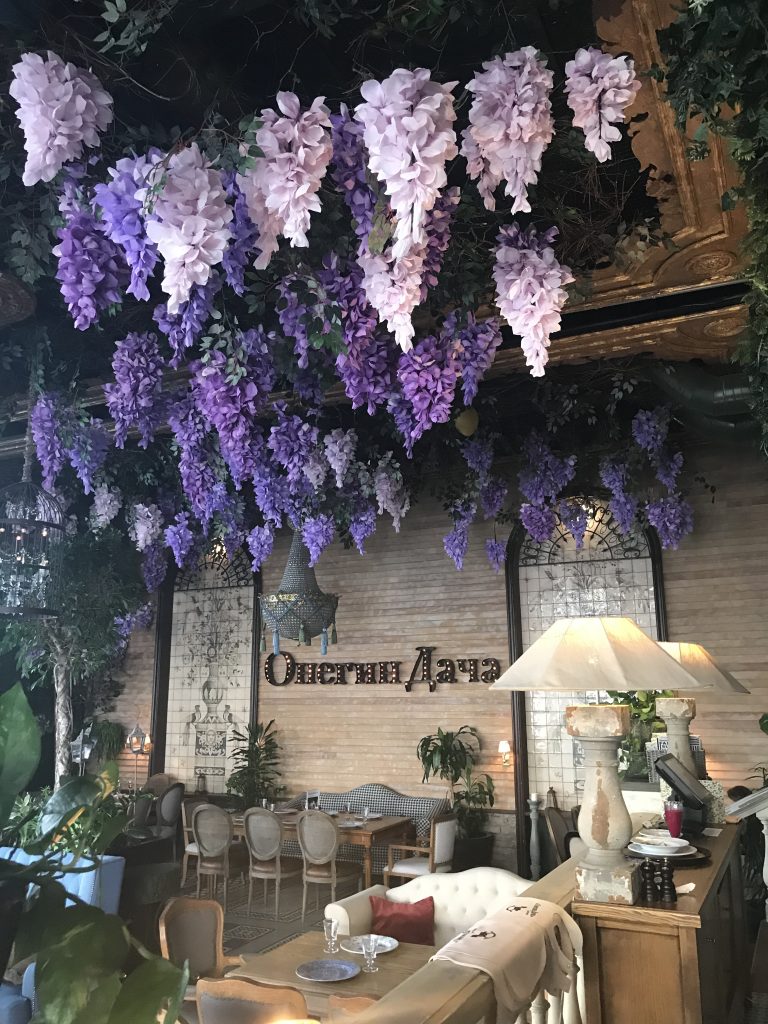 One of the most nerve-racking things I did this summer was trying to protect a little pigeon chick that had fallen into our yard. It was just beginning to practice flying and, with so many cats around, we were really worried about it. For about a week, we monitored it as well as we could, leaving some food outside and chasing away all the bloodthirsty cats (we didn’t touch it or take it inside as we’d read human contact could be bad for it). To our great joy, the chick survived and eventually flew away with a couple of other pigeons (who we imagined might be the parents, though it might just be us wishing for a happy ending).

It has to be this one, listing five things anyone should know about Rostov, the capital of Russia and one of the World Cup host cities this summer.

What a summer! I can’t believe it’s already past us, and we’re now in November. Thank you for reading – I bet your tea is cold by now! What was your summer like? Did we visit any of the same destinations?