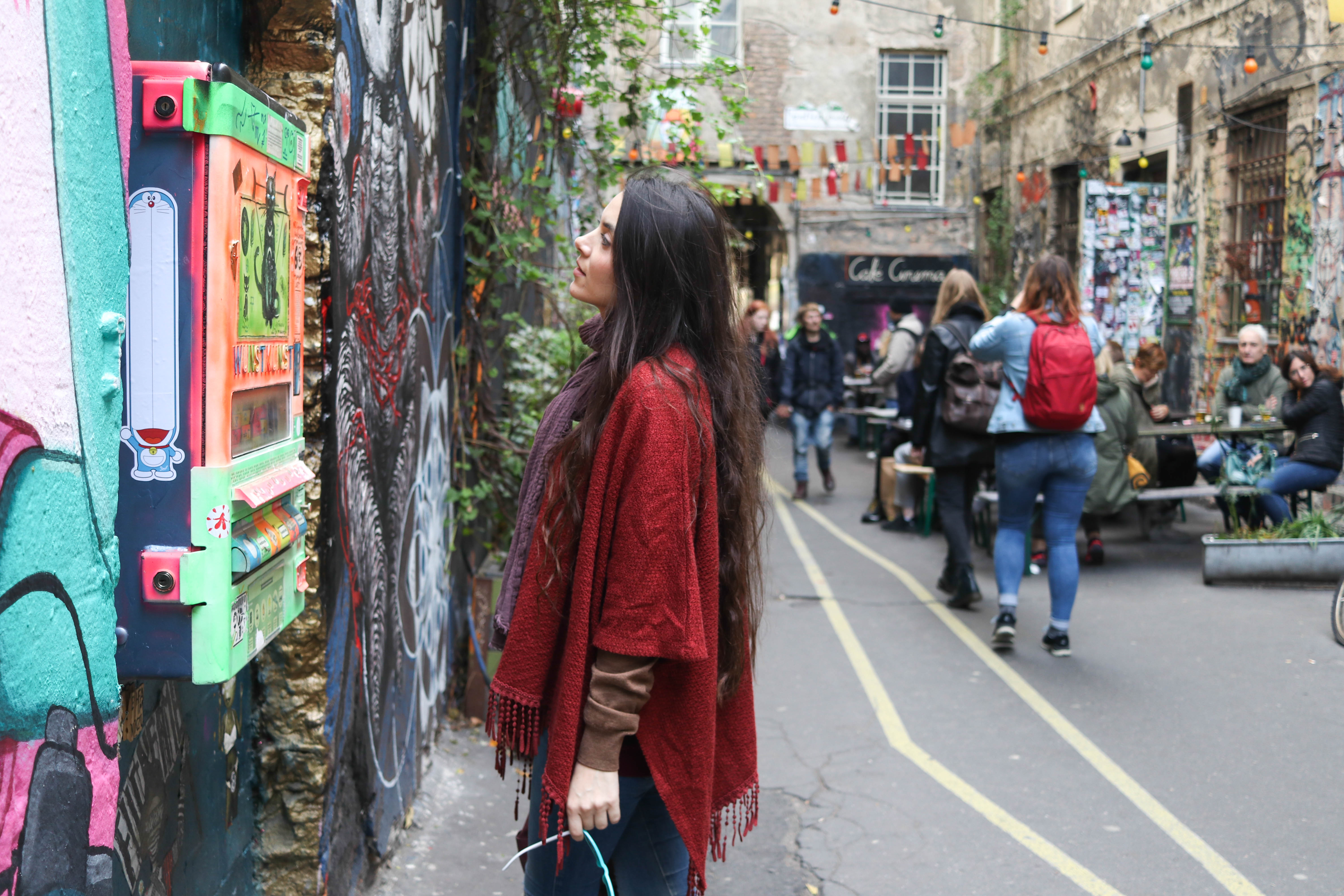 What comes to your mind when you think of Berlin? Like many big cities, Berlin is full of contrasts: at once businesslike and relaxed, strict and chill, splendid and subdued, bursting with fun places to discover but also with dark memories. You could easily spend your holiday just discovering the city’s many museums, or touring the sites related to the Second World War, or visiting cute little cafes and bars – or you could pick and choose a little bit of everything, which is what we did on our five-day, flight-free city break in Berlin this autumn.

After Amsterdam, Berlin felt like a big and versatile city, with plenty of different things to do and interesting or important places to explore. One afternoon I walked down the river all the way to the Charlottenburg castle, sat on the bench and read. The next day we borrowed bikes from our hotel and cycled through the Tiergarten park to a small but popular vegetarian restaurant in the centre. On the third evening we decided to try out e-scooters and rode them all the way to the Mall of Berlin, where a piece of the Berlin wall stood in the courtyard as a poignant reminder of the painful history that the city has endured.

Before last month, I had only visited the German capital once, on a press trip focusing on the centre and the main sights. Two visits are certainly not enough to get to know a city well, but I feel like my perception of Berlin has broadened and deepened a lot thanks to this second visit. 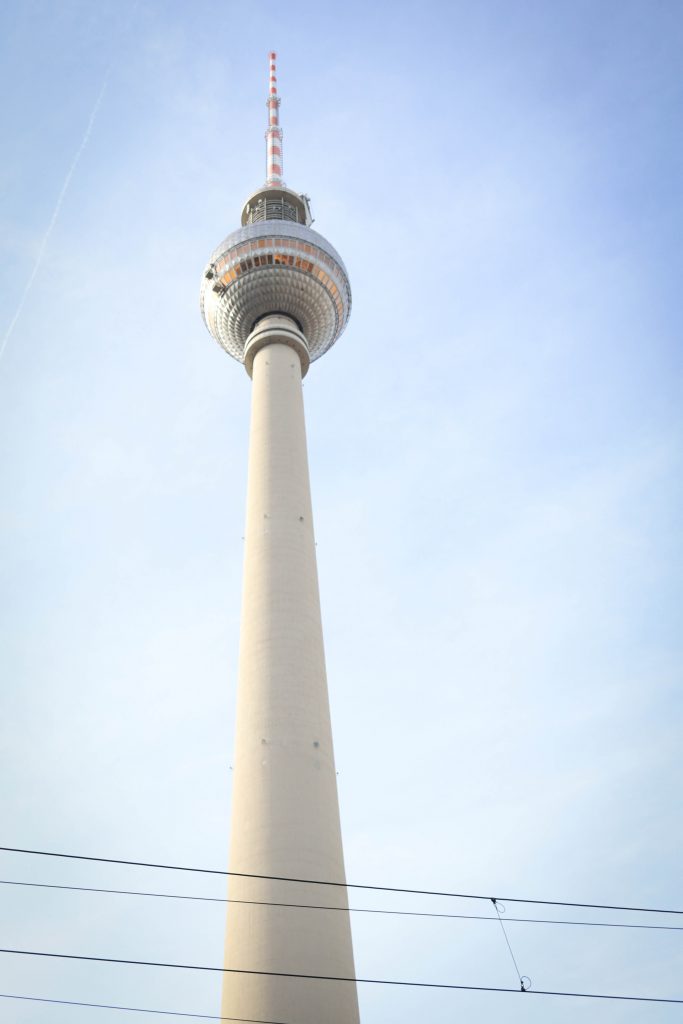 TRIP IN A NUTSHELL: AUTUMN CITY BREAK IN BERLIN, GERMANY

Where did we stay?
In the brand new, four-star KPM Hotel & Residences, five minutes walking distance from the Tiergarten station (and the park). The hotel was stylish, beautifully designed and impeccably clean, but there were a couple of teething problems: the spa and the gym were both out of order during our stay, and there was quite a lot of construction noise in the mornings. Overall it was still a great experience, particularly after we were upgraded to one of the most beautiful hotel rooms I’ve ever seen. I definitely wouldn’t say no to staying here again! 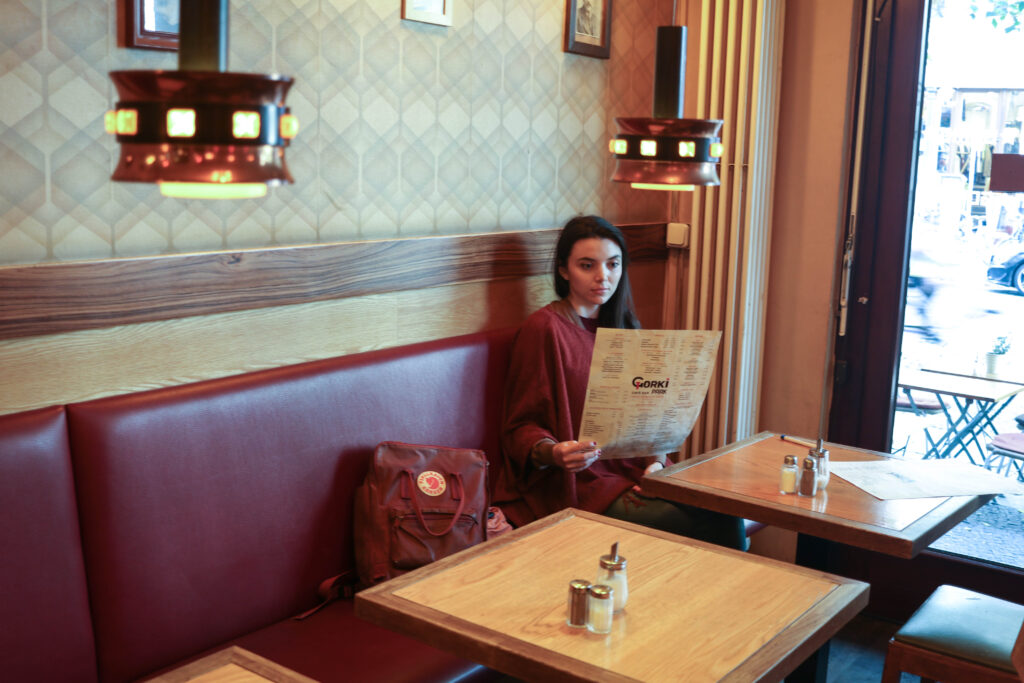 What did we do?
We’d planned on spending a lot of our free time floating around in the hotel spa, but as it was out of order (see above) we ended up having a more active holiday: walking around town, exploring different neighbourhoods, riding bikes and e-scooters and admiring the Autumn colours in the Tiergarten. I even went running twice, something that I almost never do!

Vegetarian restaurants. Berlin is known as the vegetarian capital of Europe, and I now understand why. Finding vegetarian food was so easy that we actually managed to keep to a mostly vegan diet throughout the trip. Delicious and ethical! 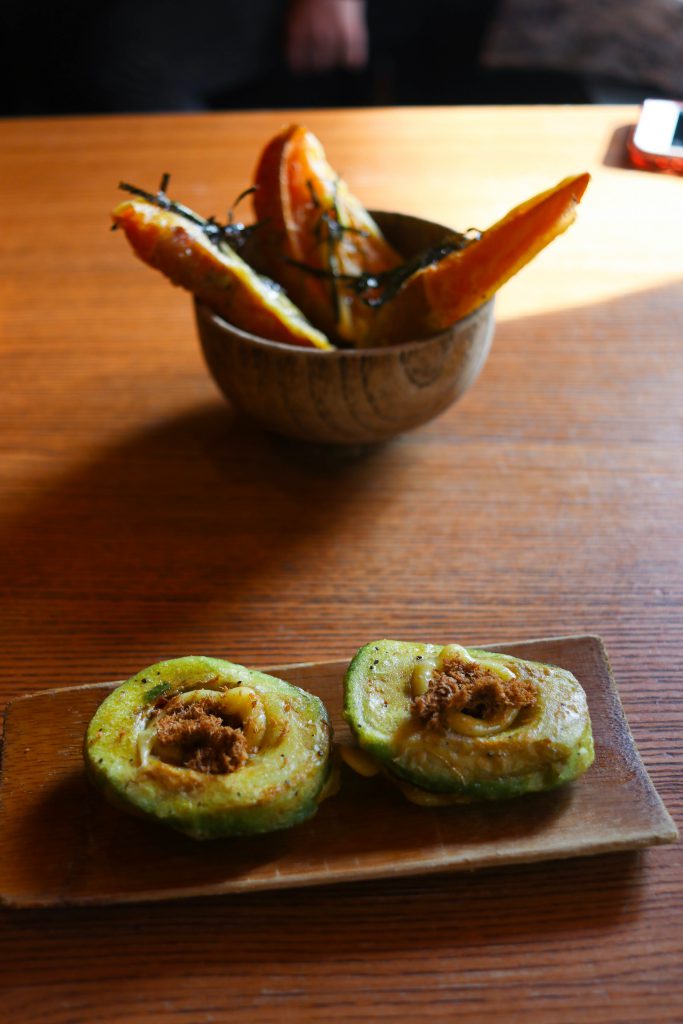 Riding electric scooters. E-scooters seem to be hugely popular in Berlin, and there was usually a pair standing around every other corner, so using them was both convenient and easy. It’s a nicer way for a tourist to get around town than using the public transport, more practical than walking when getting from one end of the city to other, and felt safer than cycling (which we also tried one day). I was a bit wary about using them at first – I’d only trialled them once before – but by the end of our stay I felt like a pro. Even my boyfriend commented on how fearless I looked whizzing down the cobble-covered little lanes. It was so much fun!

Fall foliage. Staying near Tiergarten meant frequent walks in the park, sometimes more than once a day. This allowed me to enjoy early Autumn at its best: it was still relatively warm and mostly sunny, but the leaves of the trees were already turning all colours of the autumn palette: yellow, orange, golden, red… it was beautiful, calming and inspiring. 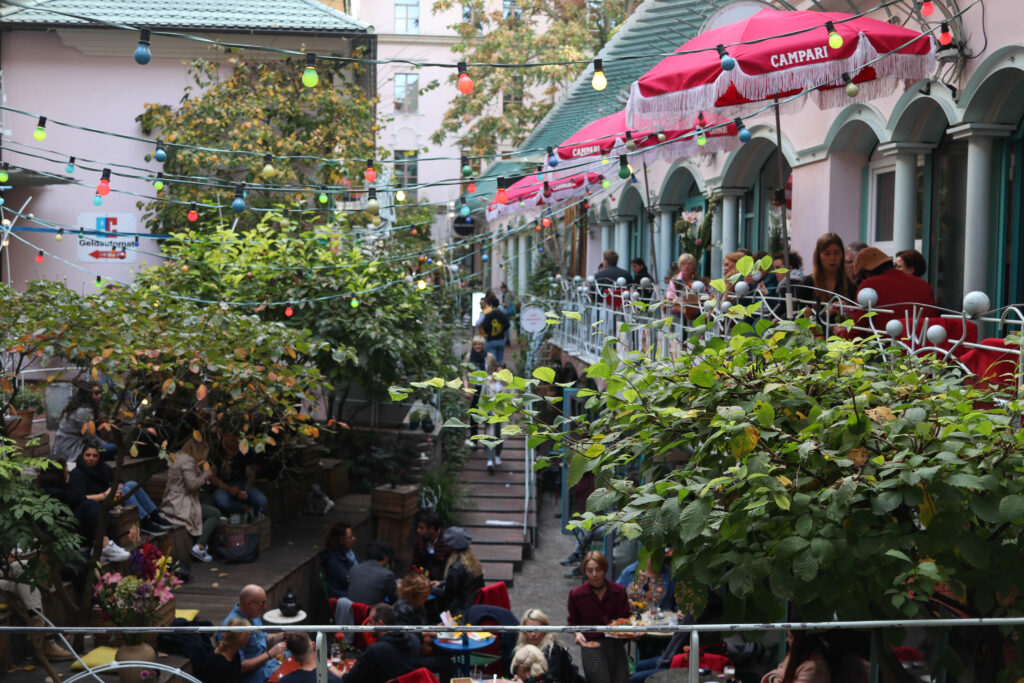 Travelling by train. What I particularly liked about our trip was that we travelled to Berlin by train. The seven-hour journey from Amsterdam to Berlin included a change of trains, while the direct journey back only took around six hours. Sure, flying could have been quicker and cheaper, but taking the train is more comfortable and MUCH better for the environment. Berlin is easily reached by rail from most of continental Europe and Britain, so please consider taking the train if you’re planning on visiting Berlin.

Anything to improve?
The hotel was still in the soft opening season, and there were a few teething issues. We had been looking forward to spending a couple of evenings at the spa, but soon found out that there had been a problem and the spa, together with the fitness centre, would remain closed for the duration of our stay. The first morning of our stay I woke up at 7am to some weird and very loud noise – only to discover that part of our window was covered by scaffolding and there were men working directly outside. We were kindly offered a free breakfast and moved to a(n absolutely gorgeous) new room, which was nice. 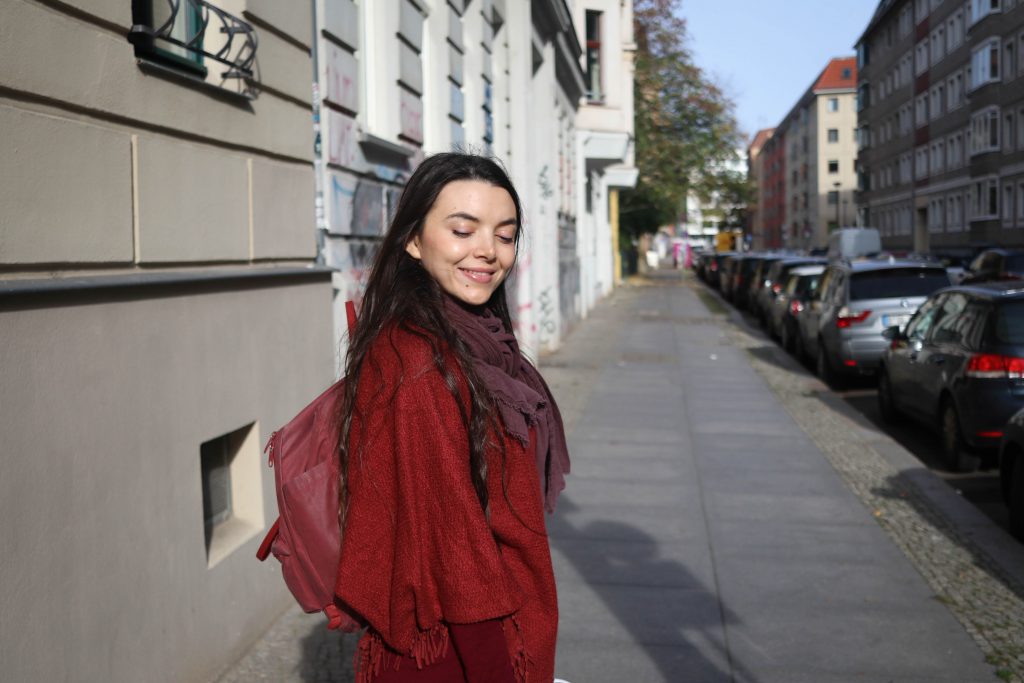 On a more general and important note, and while I really enjoyed Berlin, I could not help but wonder why there were so many cars around and why parts of the city centre had traffic arrangements that seemed completely unsuitable for big cities, with motor vehicles ruling the roads and pedestrians (not to mention the cyclists) coming as an afterthought. This was even more surprising as Berlin seems so progressive on many other fronts. Luckily, based on the articles I’ve read, this cars-first mentality seems to be changing as more and more Berliners demand clean air and space for people to enjoy their city.

Have you been to Berlin? What are your favourite places in the city? Any vegetarian restaurants that you’d recommend people try?

I hope you enjoyed reading about our city break in Berlin. If you have any questions, leave me a comment below, and I’ll try my best to answer. For more travel stories, click here and check out my Instagram feed… and don’t forget to follow Studying the World on Facebook and Bloglovin to keep up with future posts!