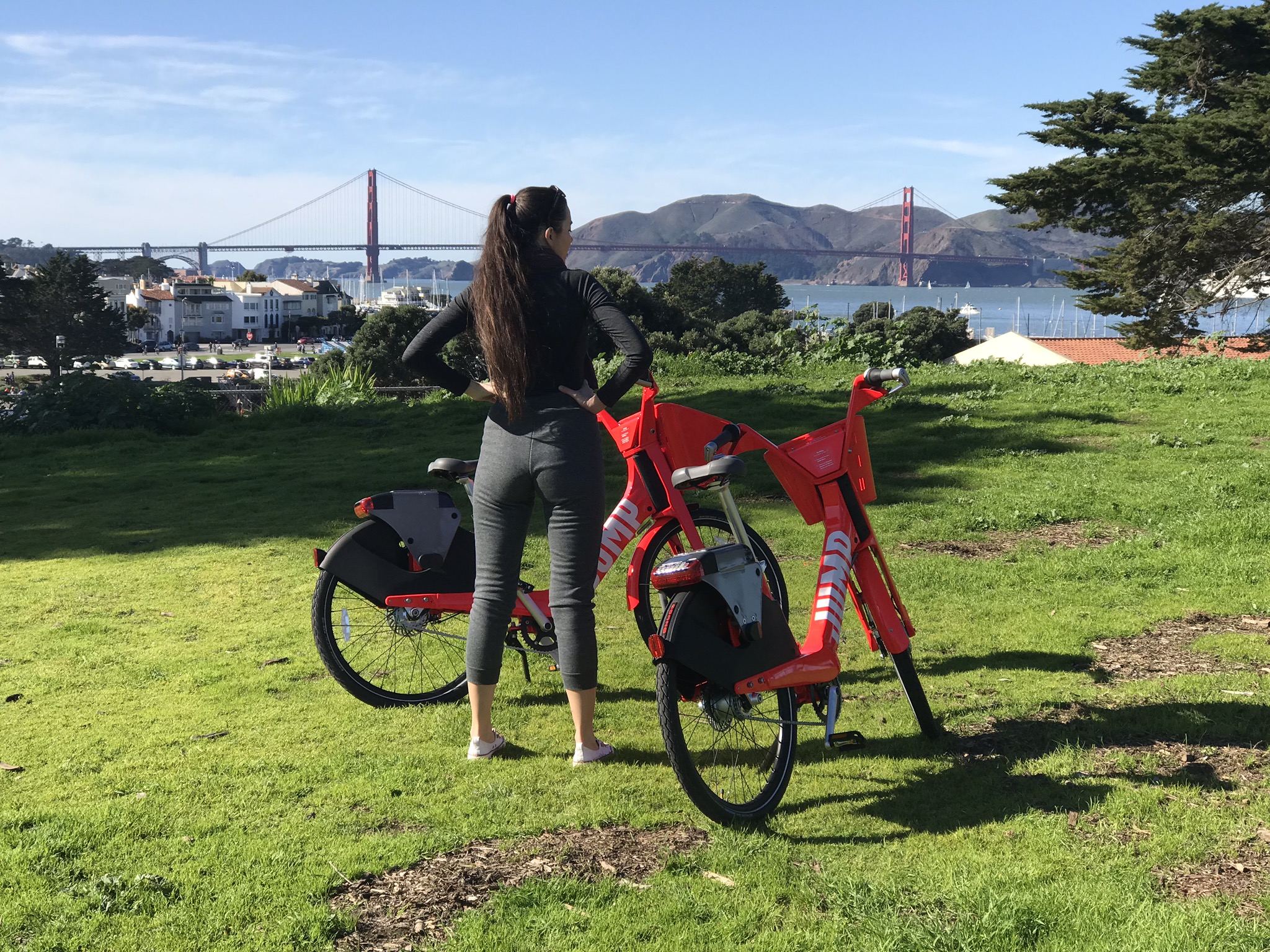 There’s a new kid on California’s bike share block – and this one’s electric! Studying the World trialled JUMP Bikes, San Francisco’s first dockless e-bike scheme, on a cycle trip over the Golden Gate Bridge. Read all about it here.

Hello from San Francisco! We got here a few days ago, and the weather has been amazing ever since. The weekend in particular was warmer than many summer days back home in Finland, so we got a wonderful idea: let’s spend the Sunday cycling around town, enjoying the warm ocean breeze and the glorious sunshine. In fact, if you follow me on Instagram, you might already have seen the snaps of us pedalling over the Golden Gate on our bright red bikes. My local friends had warned me that cycling in San Francisco was not for everyone: “It’s so hilly out there!”. It is – but that didn’t bother us, as we were riding JUMP Bikes, San Francisco’s brand new electric bike-share cycles, which did all the hard work for us.

And yet we almost gave this adventure a miss. There was very little information available online on Jump Bikes, other San Francisco bike shares, and electric bike share schemes in general. We found this a bit off-putting – it took us half an hour to figure out if we could even use Jump Bikes or another SF bike share for our desired purpose (cycling over the Golden Gate) in the first place. I’m very happy that we did decide to go for it in the end, as we had an amazing time riding our e-bikes around the sunny streets of San Francisco!

In this post, I’ve put together everything I wish I’d known about JUMP Bikes before trying them out. Hopefully, it will help you have a great day out in the city by the bay. I will write more about our itinerary – including riding the e-bike across the Golden Gate! – in another post.  Also, if you’ve already tried JUMP Bikes or other e-bikes / bike shares in San Francisco, I’d love to hear about your experience – leave a comment below or send me an email.

Without further ado, jump on the saddle, and let’s get pedaling!

What is JUMP Bikes? 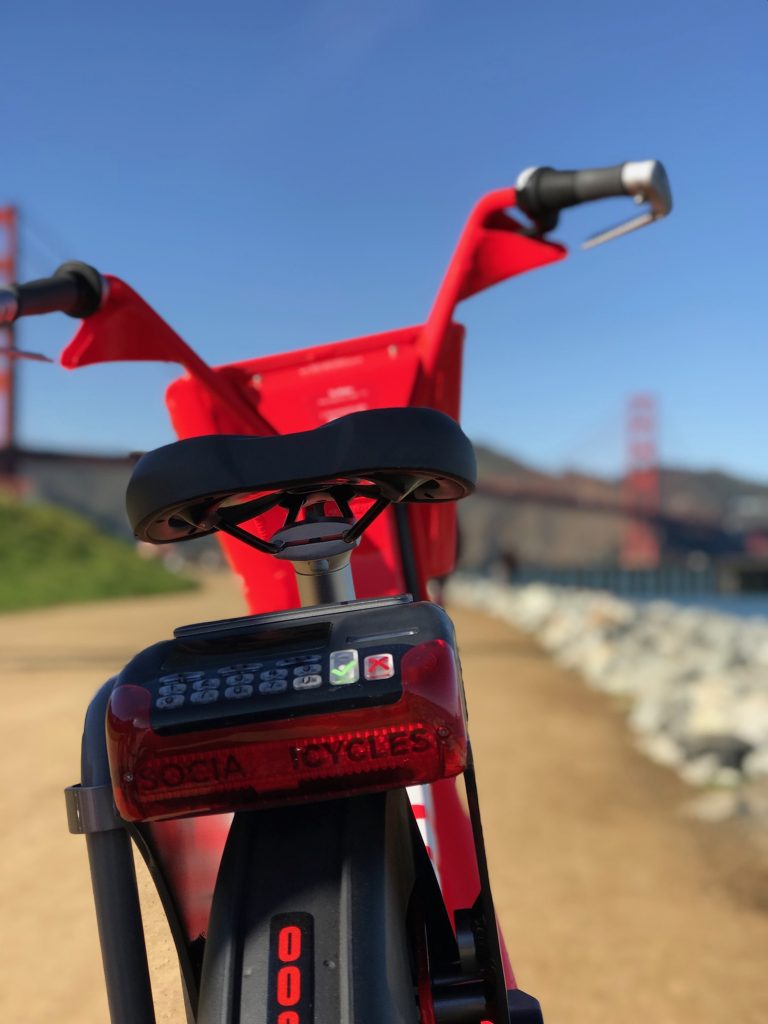 1. JUMP Bikes is a dockless bikeshare, which means that the bikes have no designated “stations” but can be found anywhere inside the operating area.

2. The bikes come with an integrated lock that you use to secure them to an existing bike rack within the operating area (though we also saw people securing them to other things..).

3. You need a JUMP Bike app to operate the cycles. The app shows you the location of available e-bikes as well as their charge. 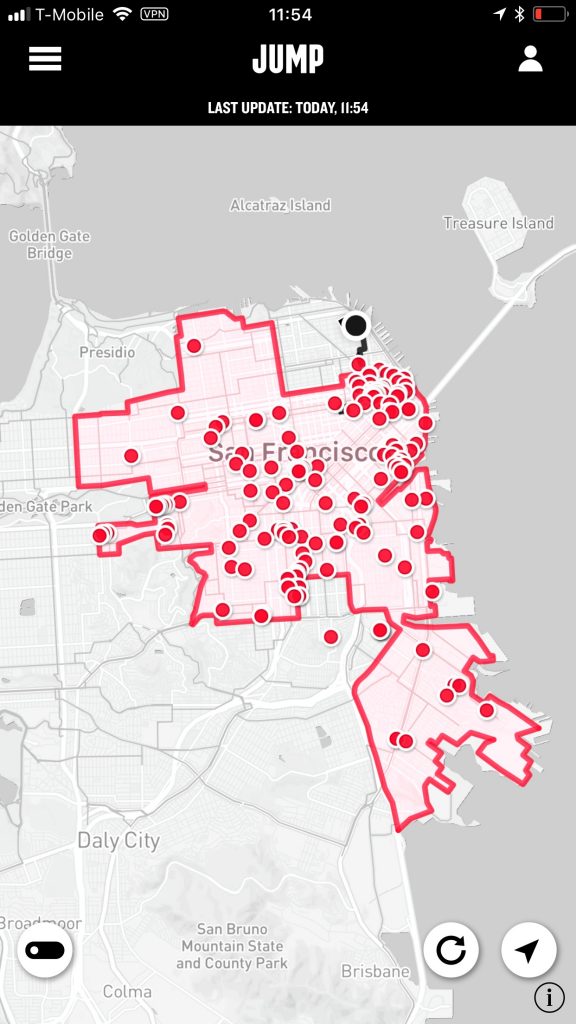 4. The operating area covers most of downtown San Francisco but not the more touristy areas such as North Beach, Presidio or the Golden Gate Bridge. Check out the map (above, available on the app) and plan ahead!

5. You are allowed to cycle outside of the JUMP Bike operating area, but you have to be able to cycle back without the electric pedal assist in case the e-bike runs out of battery.

6. The pedal assist should last for around 30 miles on a full charge. You can monitor the battery situation on the app. As an example, my boyfriend’s bike was at around 60 percent when we started and ended up at around 25 percent after three hours and 14 miles.

7. Turns out that electric bikes are surprisingly powerful, so if you have no prior experience of riding them, take some time to familiarise yourself with the bikes and the safety instructions, such as how to brake safely. 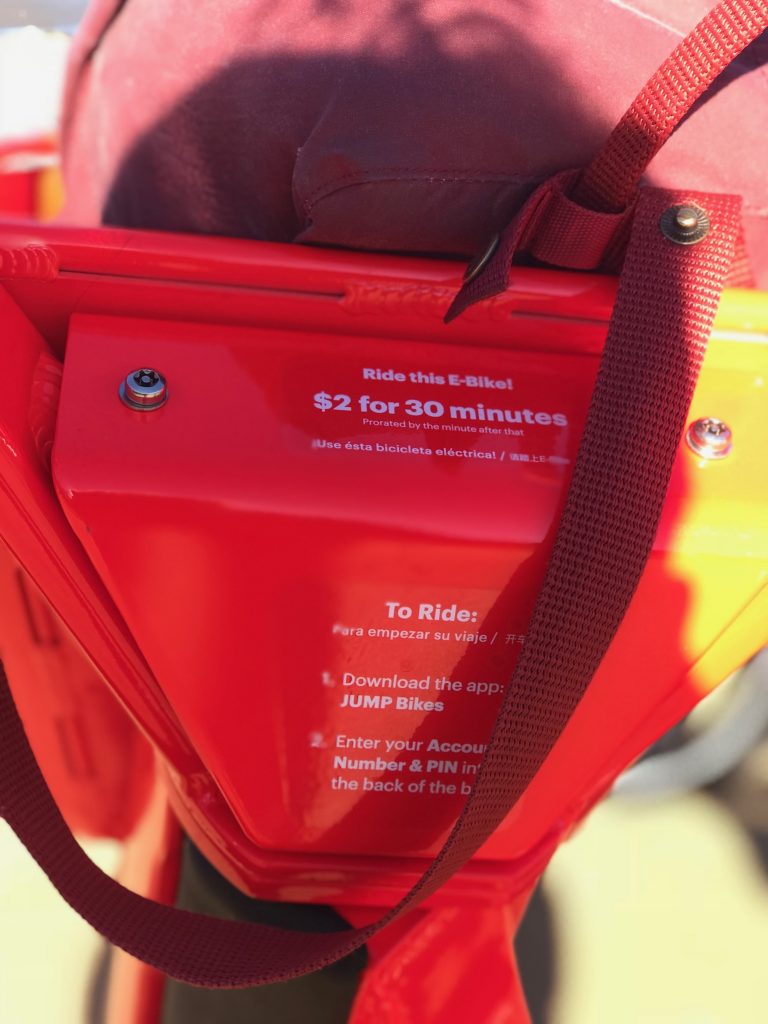 8. Using JUMP Bikes costs $2 for the first 30 minutes, $4 per hour after that. This makes them considerably cheaper than other San Francisco bike shares and rentals on longer trips (more on this below).

9. You can monitor the time, length and cost of your journey on the little screens attached to the bicycles. I found this very helpful.

10. Riding JUMP Bikes is SO MUCH FUN. Really. (And no, this is not an ad nor a sponsored post nor a collaboration of any sort). It feels like a combination of cycling and flying, and you can get up the steepest hills in no time and with very little effort. Let me repeat myself: It’s SO MUCH FUN.

E-biking around San Francisco, or how JUMP Bikes work in practice 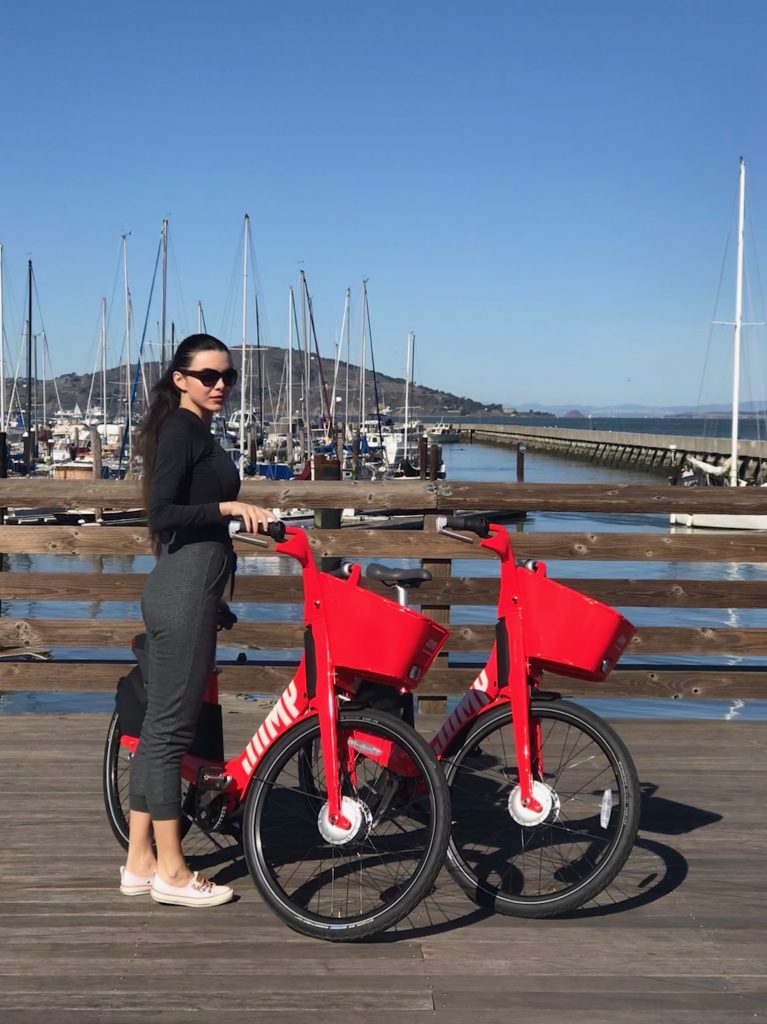 We picked our e-bikes up on the Market Street. As there are no designated docks, it took some searching to find two bikes near each other. They are quite easy to sport thanks to their bright red colour, which earned us a couple of compliments later in the day.

My boyfriend had pre-registered to use the bikes on the Jump Bike app, whereas I downloaded and registered mine on the go, which took me about five minutes (you can’t pick up two bikes on one app). We accidentally locked the first bike after renting it and then had to unlock it again; this counted as one rental and thus cost us $2.

I enjoy cycling but had never ridden an electric bicycle before, so I was a bit nervous, particularly as the bikes are quite heavy. We started by riding up the Embarcadero, and it only took me a couple of minutes to get hold of how the e-bikes work. The first real test came when we were riding up the steep hill leading from the Aquatic Parc Pier to Fort Mason: I was just telling my boyfriend that I couldn’t do it and would have to get off the bike when I realised that actually, I was doing it just fine. We got up the hill in a minute, and there was no stopping me after that. Riding an e-bike gave me more confidence, too: I didn’t feel like I was slowing down my companion or holding up the traffic (neither of which you should worry about when cycling anyway – your main focus should always be on safety).

How does JUMP Bikes compare to other bicycle rentals and bike shares in San Francisco? 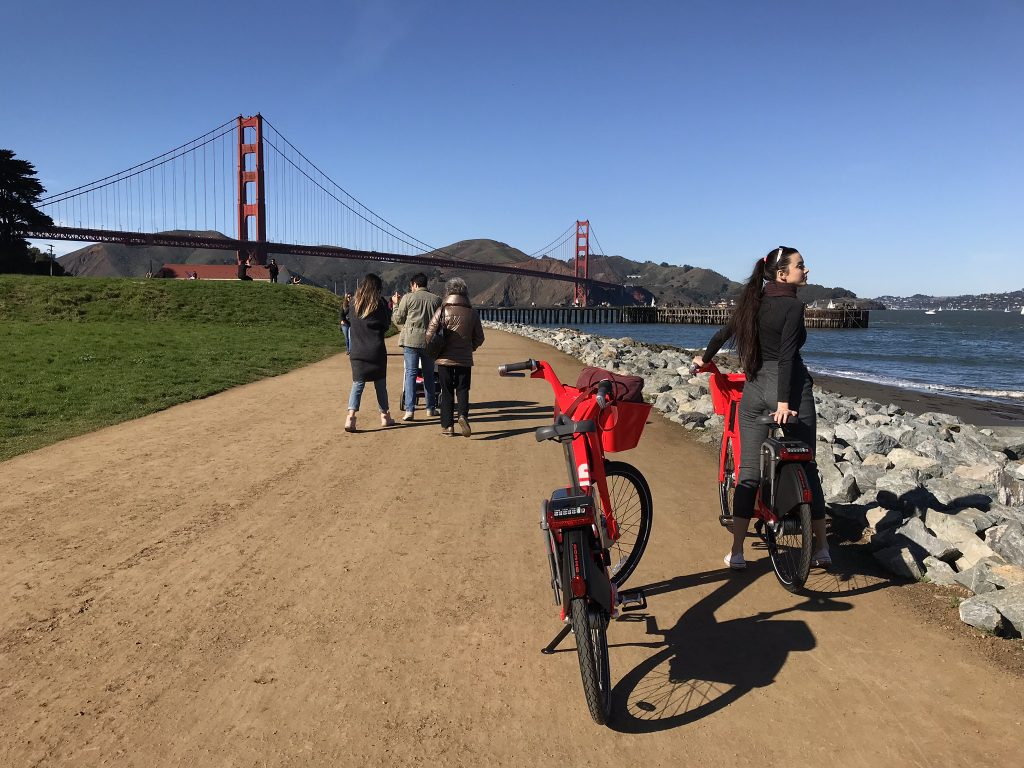 Preparing for our day trip, we also checked out other bay area bike shares as well as the more traditional bike rentals. The latter option got dismissed immediately after we found out that bike rentals near us charged  between $35 and $60 per bike per day. With some of them, we would have ended up paying $100 for our three-hour trip – I know that San Francisco is an expensive city, but that’s just ridiculous.

We were also surprised to learn that the $9.95 DayPass from the rival Ford GoBike – currently the most popular bikeshare in San Francisco – only includes 30-minute rides, charging an extra $3 for every 15 minutes after that. This means that you would have to dock your bike every half an hour to avoid excess fees. The problem with this? There are no docking stations anywhere near the Golden Gate bridge, making it potentially a very expensive trip.

This didn’t seem to make much sense (after all, you’d think that the bikeshare programmes would be keen to target tourists pedalling for the iconic SF sights such as the Golden Gate), until we found this article in a local paper. Turns out Ford GoBike did offer day passes allowing for unlimited three-hour trips, but had to discontinue these due to pressure from San Francisco bike rental companies who said they could not compete with the bike share prices. 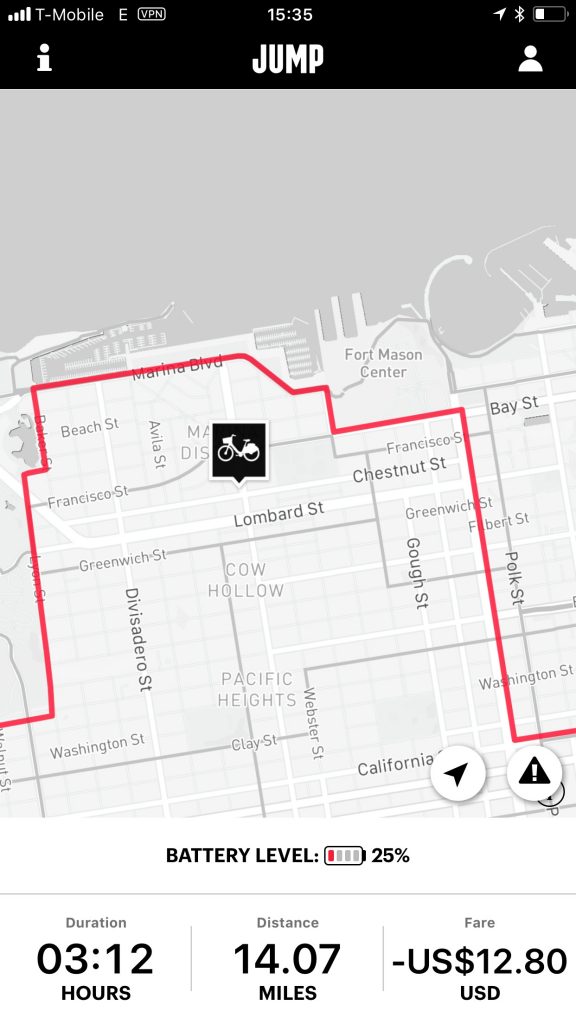 Let’s hope the same thing doesn’t happen to JUMP Bikes. For now, it offers great value for money: Our 3-hour, 14 mile cycle trip over the Golden Gate Bridge and back cost us less than $13 per person, $26 in total . What’s more, some of the competing prices cited above are for regular bikes, while we had e-bikes, which made cruising the hilly streets of San Francisco that much easier.

Long story short: if you’re in town, I’d recommend giving JUMP Bikes a go asap. Also, make sure to check back soon for our trip report of crossing the Golden Gate Bridge on e-bikes – hands down one of the most amazing things I’ve ever done in San Francisco.

Have you tried JUMP Bikes, or another bikeshare in San Francisco? Do you prefer e-bikes or regular bicycles? What’s your favourite cycle route in the city?